What is a Herniated Disc?

The intervertebral or spinal disc is a structure in the spine whose primary purpose is to act as a shock absorber between adjacent vertebrae.

Spinal discs also act as ligaments that hold the vertebrae of the spine together and as cartilaginous joints that allow for slight mobility in the spine.

There are a total of twenty-three intervertebral discs in the spinal column. The most common discs in the lower back to become injured or degenerated are at the levels between L4-L5, and L5-S1.

Spinal discs are composed of two parts: a tough outer portion and a soft inner core. The design has been likened to that of a jelly donut.

The annular fibers hydraulically seal the gelatinous nucleus and evenly distribute pressure and force imposed on the structure.

The outer portion and inner core of the spinal disc fit together like two concentric cylinders and are interconnected by cartilaginous end-plates.

At birth, eighty percent of the disc is composed of water. In order for the disc to function properly, it must be well hydrated.

The nucleus pulposus is the major carrier of the body’s axial load and relies on its water-based contents to maintain strength and pliability.

Over time, spinal discs dehydrate and become stiffer, causing the disc to be less able to adjust to compression.

While this is a natural aging process, as the disc degenerates it can become painful in some individuals.

The most likely reason for this is that the degeneration can produce micromotion instability and the inflammatory proteins (the soft inner core of the disc) probably leak out of the disc space and inflame the well-innervated structures next to the disc (e.g. nerve roots).


Sometimes a twisting injury damages the disc and starts a cascade of events that leads to degeneration.


The spinal disc itself has very few nerve endings and no blood supply. Without a blood supply the disc does not have a way to repair itself, and pain created by the damaged disc can last for years.

In general, as we age there are less inflammatory proteins in the disc space and discogenic pain rarely occurs after 60 years of age.

Many of the following terms are used when referring to a herniated disc:

The term, herniated disc, is derived from the action of the center nucleus tissue when it is forced outward.

The disc itself does not slip. However, the nucleus tissues in the center of the disc can be placed under so much pressure that the outer ring of cartilage, the annulus, ruptures against one or more of the spinal nerves.

This can cause pain, numbness, or weakness in the lower back, leg or foot. 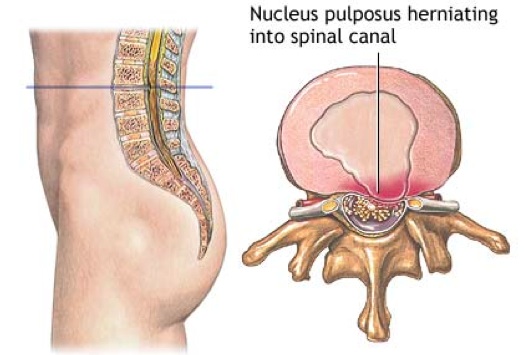 WHAT CAUSES SYMPTOMS OF A HERNIATED DISC?

When the disc ruptures and presses outward, a spinal nerve may become trapped by it.

A disc may rupture suddenly in an event such as a fall or an accident, or may occur gradually with repetitive straining of the lumbar spine.

Often people who experience a ruptured disc already have lumbar spinal stenosis, a problem that causes bone spurs and inflammatory tissue to take up some of the precious space around the nerves.

When disc herniation occurs, the space for the nerve is diminished and irritation of the nerve results.


COMMON SYMPTOMS OF A HERNIATED DISC

Most commonly experienced over the outside of the thigh, the lower leg, or foot. Shooting pain may be experienced coming all the way down the leg; patients often describe an electric shock type of symptom.

This is the medical term for abnormal sensations such as tingling, numbness, or pins and needles. These symptoms may be experienced in the same region as painful sensations.

Because of the nerve irritation, signals from the brain may be interrupted causing muscle weakness, usually of the ankle. Nerve irritation can also be tested by examining the reflexes of the knee and ankle.

These symptoms are important because it may be a sign of cauda equina syndrome, a possible condition resulting from a herniated disc.

This is a medical emergency, and you should see a doctor immediately if you have problems urinating, having bowel movements, or if you have numbness around your genitals.

All of these symptoms can be due to the irritation of the nerve from the herniated disc.


DOES PAIN IN THE BUTTOCKS OR DOWN THE LEG always INDICATE A HERNIATED DISC?

No. It’s possible that pain in the buttocks and/or down the leg is being caused by active myofascial trigger points in muscles of the lower back, buttocks, or legs.

Active trigger points can be responsible for pain that ranges from bothersome to severe, and can be similar to pain caused by a herniated disc.

In fact, the great majority of lower back pain is not caused by disc herniation, but rather muscular compensation and myofascial trigger points.


WHAT IS A HERNIATED DISC STRATEGY?

If you have been in an accident and have been injured, it is always prudent to be evaluated by a physician. One or both of the following diagnostic procedures will likely be used to determine if you have a herniated disc:

A diagnostic test which uses invisible electromagnetic energy beams to produce images of internal tissues, bones, and organs onto film.

A diagnostic procedure that uses a combination of large magnets, radiofrequencies, and a computer to produce detailed images of organs and structures within the body.

However, if it has been determined through an MRI or X-ray that you do not have a herniated disc, but your pain is chronic and significant, it is highly likely that myofascial trigger points are the cause.