THE ROOT OF REFERRED Lower Back & Hip Pain

Myofascial trigger points are one of the most prevalent causes of pain in the body and yet this phenomenon is not well understood in conventional medicine.

The chief reason for this shortcoming is that medical schools still devote very little attention to the muscular system, and trigger points are a muscular phenomenon.

But if you are suffering from pain that has eluded diagnosis, it's essential to clearly understand how myofascial trigger points work. 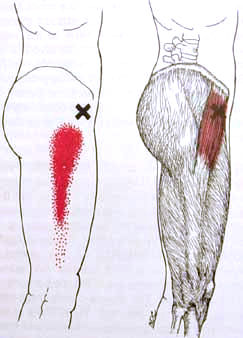 Myofascial Trigger Point in the Tensor Fascia Lata referring down the thigh.

Drs. Travell and Simons define a trigger point as follows…

The key part of this definition is the last phrase:

“…can give rise to characteristic referred pain.”

What distinguishes myofascial trigger points from other tender points is that it creates a referred sensation — pain, tingling, numbness, aching, or thermal sensations like hot or cold.

This referred sensation can either radiate out from the point, or it can refer to another part of the body.

If a point is simply tender but does not refer, we call it an ischemic point (a region of poor blood flow).

Too often health professionals toss around the term “trigger point” to refer to any tender point in the body.

But this just creates confusion in identifying true trigger points.

A trigger point referral IS NOT caused by compression, “pinching,” or pressure on a nerve of any kind.

That describes a nerve root referral in which pain is caused due to the compression or entrapment of a nerve by bone, cartilage, or soft tissues.

Two examples of a nerve root referral can be illustrated with the sciatic nerve which travels from the lumbar spine through the buttocks and down the leg. The sciatic nerve can be…

A trigger point referral, on the other hand, is a muscle-based phenomenon.

When muscles become ischemic (low blood flow) as a consequence of strain or chronic contraction, a strange neurological phenomenon can occur…

The pain, then, would not be caused by a nerve being pinched or compressed in my lower back, but rather by the trigger point creating a feedback loop of signals: from my lower back to my nervous system to my buttocks.

Myofascial trigger points can develop within skeletal muscles and fascia for a wide variety of reasons:


OTHER TYPES OF TRIGGER POINTS

In addition to primary myofascial trigger points, two other forms of these pain-referring points are also possible:

Both of these types can help us sort out an otherwise bewildering assortment of pain and symptoms in the body.

A secondary trigger point can arise due to muscular compensation. For example, let’s say I sit a lot for my job and this results in a primary trigger point developing in my right iliopsoas muscle.

Because the iliopsoas muscle is the primary hip flexor used to raise my leg in walking, it may be painful to take a step with my right leg.

In order to be able to take a step with less pain, my body might make an adjustment when I take that step. One common adjustment is to externally rotate the leg slightly just prior lifting the leg.

This takes some stress off the iliopsoas and transfers it to the adductor muscles located in the inner thigh.

But the adductor muscles are not designed for this job and so can easily become overworked making them chronically tired and sore.

It’s also worth noting that in this example all or most of my symptoms might reside in the inner thigh, in the adductor muscles.

While the main problem remains in the iliopsoas, the source of the primary trigger point, the loudest symptoms could be elsewhere.

For example, let’s say I have a job that causes me to be hunched over much of the day.

A hunched over physical posture in which the shoulders are continually rounded forward can exert strain on the infraspinatus muscle (the middle muscle of the shoulder’s rotator cuff).

Should this issue go untreated for a period of time the front of the shoulder might itself become ischemic.

In this example an individual might have chronically rounded shoulders, develop a trigger point in the infraspinatus, but not experience symptoms in that rotator cuff muscle.

All symptoms might be in the front of the shoulder compounded by...

The good news about myofascial trigger points is that they are very treatable. Three effective treatment strategies include:

Various types of massage and bodywork can be very effective in interrupting and eliminating trigger points. Compression, kneading, stroking, & myofascial release of muscles and their fascia are all effective methods.

In my private practice my preferred method is a technique called Neuromuscular Massage Technique. What distinguishes this type of hands-on therapy is the use of a single direction stroke and also determining the client’s direction of stroke preference.

Stretching out muscles that contain myofascial trigger points can contribute significantly to the elimination if these points and their referral patterns.

However, if a trigger point has been active for a significant period of time the muscle may require manual therapy before stretching is effective.

The reason for this is that a muscle containing an active trigger point can neither fully lengthen nor fully contract. This is also why you cannot properly strengthen muscles with trigger points.

Also I have found that Active Isolated Stretching is vastly superior to static stretching, especially in cases of very tight, very stubborn muscles.


activation and toning of the antagonists of trigger points

Among the most overlooked strategies for treating chronic muscular tightness in general and trigger points in particular is the activation of antagonists.

Muscles which are chronically tight and short, especially those with active trigger points, will often have very weak antagonists. Sometimes the antagonist muscles are not firing at all.

When a muscle on one side of a joint contracts and shortens, the muscle on the other side of the joint is  neurologically signaled to relax and lengthen.

Without this phenomenon we could not have coordinated movement in the body. When your elbow bends, the biceps contract while the triceps lengthen. The triceps, here, is reciprocally inhibited.

In cases where a muscle has become chronic contracted, it's antagonist can become atrophied thus disrupting the reciprocal relationship between agonist and antagonist.

By toning the antagonist of a chronically contracted muscle we can, in effect, deactivate the chronic contraction, thus also deactivating the trigger point in that muscle.

Just as cold reduces inflammation in muscles, cold can also alleviate trigger points. A technique described in Myofascial Pain and Dysfunction: The Trigger Point Manual is the use of something called vapocoolant spray.

But more recently ice has replaced such sprays. A simple ice method is to place a tongue depressor in a cup of water then freeze it. This creates a kind of ice popsicle that can then be used to stroke the muscle containing the active trigger point.

Stroking the muscle with 3-5 sweeps in one direction is typically adequate.